If you’re thinking about opening your own online casino, or are already running one, no doubt it’s full of the usual suspects: slot machines, poker tables, blackjack, roulette. But what if you wanted something a little different? Is there anything out there that still fits the bill of a classic casino table game, but is not the same old, same old, that is in every other online casino? Well, it turns out there are a couple of options that fit that description to a T: sic bo and teen patti. Both are classics casino table games, but they haven’t had the same exposure that the likes of poker and blackjack have enjoyed. And yet, they’re immensely popular. Read on to see our explanations for why sic bo and teen patti are a great addition to any online casino.

What is Sic Bo?

Sic bo goes by many names, including “tai sai”, “dai siu”, “big and small” and “hi-lo”. The point of the game is to guess the combination of three dice in a chest. The dealer shakes up the chest, players make their bet, and the chest is opened to reveal the winner. It’s comparable to craps in its many betting options that range in odds for bigger wins. Betting options include specific numbers, combinations, odd or even numbers, doubles, or triples and more.

Sic Bo is popular in the Asian market

Although there are English-origin variants like grand hazard and chuck-a-luck, sic bo is of Chinese origin. By that mention alone casino operators should get excited. Even with China’s strict ban on gambling, there is a huge market to take advantage of. Sic bo gained popularity when Chinese immigrants introduced it to the new world, where it is still popular. If you’re opening or operating an online casino, sic bo is a great addition to your repertoire of online casino table game options that will appeal to a demographic that you perhaps haven’t tapped into yet.

What is Teen Patti?

Teen patti is an Indian take on the English game three-card brag that is highly popular in South Asia. The idea, much like with poker, is to create a combination of cards that is the highest ranking of all the players at the table. Whoever has the best hand wins the pot.

Teen Patti is popular in the Indian market

As mentioned, teen patti originated in India, and is still popular there today, but it’s easy to see why a western audience might pick up on it. The similarities to poker go further than the summary given above, and western audiences might be intrigued enough by the idea of a new challenge to try it out.

Even if they aren’t, Indian populations are high across the western world, especially in the US and UK. Appealing to this vast population that is known to appreciate a good game is a good way to expand the demographic of your players and grow as a casino.

They’re both popular in the West

But the best thing about both sic bo and teen patti is that appealing to one audience with these games doesn’t mean alienating another audience. Both of these games have western variants. The English have grand hazard to the Chinese sic bo, and teen patti has been compared favourably to poker, which is obviously a huge hit in the western world.

Adding sic bo and teen patti to a western-targeted online casino isn’t about to be seen as a negative by the audience. In fact, they are likely to appreciate the variation on games they’ve probably known their whole lives. You could find a lot of your existing players are excited to try something new but familiar.

However, that’s not to say that sic bo and teen patti are common. They’re both likely to be seen by a western audience as the foreign alternative they have to try and are quick to love. Something that elevates the casino experience.

But the truth of the matter is that with the right licenses, an online casino can be a global company. You could have players from all over the world visiting your online casino and sic bo and teen patti would be just the way to get there. If you’re looking to expand, you can add sic bo and teen patti to your choice of games for a chance to grow your appeal globally and gain more players. 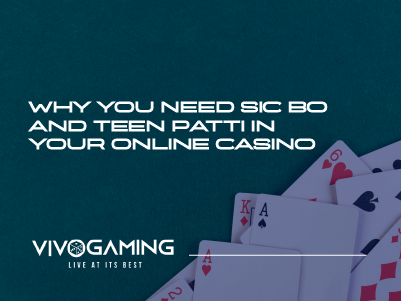